My intention was to follow in Papa’s footsteps and walk every day for one year, beginning on Father’s Day 2013. I made it through 140 days. Then, I blew my knee out on Saturday,

November 2nd. I thought it was healing, but on Wednesday, November 6th, I stood up and heard a loud pop from my knee, followed by intense pain. Long story short, it’s taken two months for my knee to heal. Today, Sunday,  December 29th, was my first long walk (2 miles) in almost 2 months.

Having failed the original challenge, I’ve learned that sometimes, regardless of the best intentions, you just don’t have any control over circumstances.  “You gotta roll with the punches,” as Papa used to say. “It’s a waste of time and energy to let it upset you. You just take it in stride and do what you can to make it better.”

Although I failed the challenge, I discovered during the time I couldn’t walk that I really enjoyed not blogging on an almost daily basis.  When I started the challenge last June, I wanted to blog about my daily “Papa’s Walk” as a way to stay accountable. Now, because I enjoy walking so much, it’s become a habit and I don’t need the added incentive to get out there.

So, since I’ve begun walking again, I’ll only post when I see or experience something really extraordinary.  I can tell you that today, aside from the countless holiday decorations throughout my neighborhood, I was astounded by the number of lemon trees that I saw laden with lemons ready to harvest. Perhaps it was a reminder from the universe that when life hands you lemons – make lemonade.

I blew my knee out. I may have wrenched it moving boxes or just getting in and out of my car, but it had been delivering twinges of pain for at least a week.  On Saturday, November 2nd, I decided to take an extra long walk to  sort of work out the kinks. (That was Day 140, when I smelled the aroma of Pumpkin Bread baking.  )

Anyway, everything seemed fine, but as the day progressed my knee got sorer and I was walking with a limp. By evening, the pain was so intense that I could barely stand. I needed to use crutches to get around. (Fortunately, we had a pair in the closet – leftovers from the days when my son had multiple mishaps on a skateboard.)

I rested my knee, iced it, took some Motrin, and by Sunday morning (Day 141) it was slightly better, but I still needed the crutches to get around. I rested all day Sunday but allowed myself to say that hobbling around on crutches counted as part of my “Papa Walk.”  🙂

Today, Monday, November 4, 2013, is Day 142.  I’m able to limp around without crutches, but my knee is still too weak to withstand a walk.  I think I’ll just be grateful that it’s healing and maybe let limping up and down my hallway a few times count as a “Papa Walk” today. 🙂

Today is Day 140 of the Papa’s Walk Challenge!

The aroma of freshly baked pumpkin bread was in the air today!  In my neighborhood, it smells like folks are recycling their Halloween Jack-O-Lanterns! 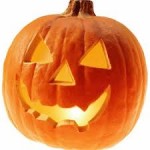 I used to make pumpkin bread from scratch for Papa after every Halloween.  Here’s the recipe for…

After Halloween, cut a Jack-O-Lantern into quarters and set it skin side up on a foil-lined cookie sheet or baking pan. Bake at 350° F for 40-50 minutes or so, until pumpkin is tender when pierced with fork. Cool the pumpkin, remove the skin, and put the soft, cooked pumpkin into a blender or food processor and puree until smooth. Use the pumpkin puree to make pumpkin bread as follows…

Mix all the dry ingredients (sugar, flour, baking powder, baking soda, and spices) in a large bowl. In a medium bowl, mix the eggs, oil, water, and pumpkin. Add the pumpkin mixture to the flour mixture and beat until well blended. Fold in the dates and pecans.

Pour the batter into the loaf pans and bake for 40-50 minutes, or until a toothpick inserted into the center of each loaf comes out clean. Cool for 5 minutes in the loaf pans, then, using a thin knife, trace the edge along the sides of the pans to loosen the loaves. Remove them from the pans, and set on a rack until they are completely cooled. Slice and serve with a dollop of whipped cream. You can also enjoy it the way Papa preferred; toast a slice and spread it with butter for a breakfast treat.

Yesterday was Halloween and today is Dia de Los Muertos. I enjoyed walking around the neighborhood to take in all of the fun decorations. A large percentage

of front lawns have been transformed into graveyards with coffins and headstones – and this year, there were lots of skeletons!

One house displayed a graveyard with 4 skeletons seated at a card table playing poker and drinking whiskey, a skeleton chef standing at a barbecue with an apron that had the words “Killin’ and Grillin'” written in blood on it, a bride and groom skeleton, a pirate skeleton (straight out of Pirates of the Caribbean), a skeleton grim reaper, and an assortment of bones, ghouls, and ghosts. It looked like a Hollywood horror movie set!

I wonder if the rise in popularity of skeleton decorations is because of the increase in celebrations of Dia de Los Muertos or Day of the Dead (on November 1st and 2nd). This Mexican holiday tradition, when families remember and honor relatives and friends who have died, is becoming more prevalent in California culture.

In fact, Redwood City (where I live) is having its first “Dia de los Muertos” celebration on November 1st. I think I’ll honor Papa’s memory by walking downtown and joining the festivities.

Yesterday was Day 137 of the Papa’s Walk Challenge!

I decided to take a different route today, and walked through a neighborhood lined with Sycamore

and California Valley Oak trees. I was surprised by the number of twigs and small branches that were strewn all over the ground. The trees were shedding kindling like crazy!  It’s serendipitous how Mother Nature provides fuel for fires at this chilly time of year.

Papa prided himself on his ability to start a cozy fire in the fireplace from scratch using kindling and other materials. If you’ve never done it, you may enjoy this tutorial at “The Art of Manliness” website.

Yesterday and today, I got the season’s first whiff of wood-burning smoke curling from a few chimneys in the neighborhood. There’s been a real chill in the air and people are starting to use their fireplaces and stoves to warm their homes.

I love the smell of wood burning smoke. It brings back fond memories of Papa showing me how to build a fire in the fireplace and how to tend it throughout the night.

Frankly, I rue the day we discovered it’s bad for us, as the Environmental Protection Agency explains at their website, Burn Wise, where they offer tips to protect your health when heating with wood including:

•Burn dry, seasoned wood that has been split, stacked, covered and stored.

•Test wood with a moisture meter (20 percent moisture or less is best).

•Use a cleaner-burning gas or wood stove.

In the San Francisco Bay Area, we run the risk of paying a $500 fine for burning wood on a “Spare the Air” Day.  Neighbors are encouraged to report violators – Big Brother is watching!

You can find out the air quality where you live at any time by visiting AirNow.gov.

On Friday, October 25th, my friend, Debbi, and I walked to a nearby shopping

center to enjoy a Starbuck’s latte. It was about a two and a half mile round trip, but the walk home was faster, fueled by caffeine.

I enjoyed a coffee break in the middle of my walk so much on Friday, that I did it again on Saturday and Sunday. I remembered that Papa enjoyed sipping a Starbuck’s latte, but he always balked at the price. After three days, I realized that I had gulped down $11.10. No wonder they call it StarBUCKS!

Thursday, October 24th, was Day 131 of the Papa’s Walk Challenge!

After being cooped up in the office all morning, my marketing assistant, Suzanne, and I were struggling to develop a marketing plan for Papa’s Pearls for the holiday season. We decided to take a break, and took a long walk with her dog, Lela.

We found the autumn scenery and fresh air invigorating and feeling recharged, we mapped out a plan of action that we began implementing when we returned to the office. Details coming soon!

For the past few days, I’ve been dodging olives that have dropped from trees and scattered across the sidewalks. There are lots of olive trees throughout my neighborhood. The olives have begun to change color from green to red to purple, and some are black (indicating the peak of ripeness). It’s olive harvest time! 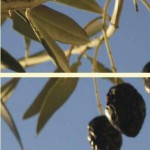 That said, even when they’re ripe, most olives are unpalatable. They have to be cured to rid them of their bitter flavor.

According to OliveTreeFarm.com, Olive trees are hardy, easy to grow, and have a  life expectancy of 500 years. It’s hard to kill them, too – the trees easily sprout back when chopped to the ground.

Although olive cultivation dates back to 3000 B.C. in Syria, the earliest written record of olive oil production in California is 1803, with the first commercial olive oil mill established in 1871 in Ventura County, California. Olives are big business throughout California with over 10,000 acres cultivated for olive-oil production.  In fact, you can learn a lot about the California olive industry by visiting: http://calolive.org/

Papa’s favorite meal was a green salad tossed with olive oil and vinegar. He loved the flavor of olive oil and used it long before it became a food fad in the 1980s.

Ever wonder how olives go from orchard to oil? Take a virtual field trip to the Olivina olive ranch in Livermore, California to learn all about it!

Did you know that my home town is the location of the Annual Arts & Olive Festival?  It’s true!  Cañada College in Redwood City, California has had a unique relationship with olives since its inception. Many of the historic olive trees that dot the landscape were naturalized from early California plantings. According to the website, “… a group of trees were transplanted to the site following the Panama Pacific Exposition held in San Francisco in the early 1900’s.” The festival is a student scholarship fundraiser.

I appreciate olive trees in the fall, however, when the trees are in bloom I suffer. I’m allergic to olive trees.  🙁

If you want to know more about olives, the Sonoma County UC Cooperative Extension maintains an olive page at their website with all kinds of downloadable and printable pamphlets and reports on olives and olive oil production.

On Saturday, near the end of my walk, I noticed a pomegranate bush in the side yard of a neighbor’s home that was full of ripe, red, pomegranate fruit. I decided to keep my eyes peeled for pomegranate bushes as I walked on Sunday, and found 6 of them over a course of 2.5 miles. All of the bushes had ripe fruit on them – some of the fruit had burst on the

Pomegranates have a long and fascinating history, as you’ll discover if you visit these websites:

PomWonderful.com – Watch a short but informative video of how pomegranates go from tree to bottle to produce the POM Wonderful brand of pomegranate juice.  When you’re through watching, use the menu to explore the history of pomegranates and discover the health benefits of the antioxidants in this “superfood.” Get some tasty recipes too!

How To Peel a Pomegranate -This website offers instructions and a video tutorial.