Sunday was Day 43 of the Papa’s Walk Challenge.

Several neighbors along my walking route provided an oldies-but-goodies soundtrack for my walk. They were listening to the radio while doing yard work, and I could easily hear the tunes. Three of the tunes I heard were summer songs from the 1960s! Click on the links below to watch performances of the songs on YouTube.com… 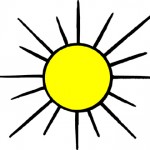 The first one was Summer in the City, a song by the Lovin’ Spoonful from 1966.

The next song was Hot Fun in the Summertime by Sly & the Family Stone that was released in 1969.

And finally, I heard Help Me Rhonda a Beach Boys hit from 1965 that was released on their album, Summer Days (And Summer Nights).

Speaking of summer songs, one of Papa’s favorite composer’s was George Gershwin who wrote the song Summertime for the opera, Porgy and Bess. Watch Ella Fitzgerald sing Summertime (circa 1968).

One of my personal favorite summer songs is Sunny Afternoon by The Kinks.

What are your favorite songs of summer?