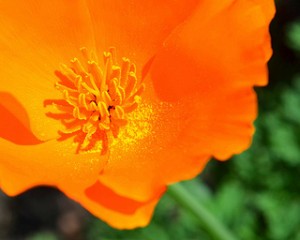 As I was walking through my neighborhood this morning I saw a California Poppy growing in a garden.

When I was little, Papa told me that the poppy was the state flower of California.  I decided to count how many times I saw poppies growing along my walking route that is lined with block after block of single-family homes.

I saw only 4 instances where people were actually cultivating poppies in their gardens – and one garden looked to contain native California plants exclusively.

I was excited to discover 11 REBEL POPPIES that defied the concrete and pavement to grow between the cracks and crevices on sidewalks and streets.  Go poppies!  🙂

When I got home I searched the Internet for more information on poppies. I discovered that the Spaniards, who settled California, named the poppy flower “copa de oro” or “cup of gold” – a symbol of the gold they hoped to find beneath the poppies in California’s hills.

California Indians valued the poppy for its medicinal uses as a remedy for anxiety and insomnia.  You can learn more on WebMD.

Did you know that April 6th is California Poppy Day? (That also happens to be my husband’s birthday!)  And there is an annual Poppy Festival every Spring in Lancaster, California. You can check out the beautiful photos of fields of poppies on their website here:    http://www.poppyfestival.com/