Yesterday was  Day 74 of the Papa’s Walk Challenge.

My husband and I volunteered to be “roadies” for our son’s heavy metal band, Raiju, for a 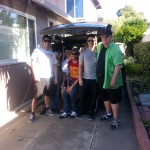 leg of the band’s tour that includes Los Angeles. That’s right, in our 6th decade on the planet, we’re livin’ the rock ‘n roll dream!  (See picture of my husband with the band members at right.) Because we’re on the road, I have to fit in Papa’s Walks wherever I can.

We loaded our van with the drum kit, guitars – and a pool cue.  (Seems the bass player plays pool wherever he goes and carries his own customized stick.) Anyway, we set out early in the morning for the six-hour drive to The Joint in Los Angeles (located next door to a medical marijuana facility that is very near Beverly Hills, 90210).

We drove down I-5 and stopped at Harris Ranch to stretch our legs. We noodled around the gift shop and then took the time to walk around the perimeter of the huge parking lot, before getting back on the road. 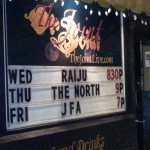 Despite getting a little lost on the way, we managed to get to The Joint a few minutes before the band’s loading time at 6:00 PM.  After dropping off their gear, we had a few hours to kill before the show started. My husband and I decided to go to Lawry’s restaurant for dinner. The restaurant originated in 1938. The owner developed a seasoned salt that became the cornerstone of Lawry’s Seasonings, which was eventually bought by McCormick. Not only did the owner invent the seasoning, Lawry’s restaurant popularized the idea of serving salad before the main meal – and they invented the doggie bag!

After dinner, we headed over to the Beverly Center, a shi-shi, upscale mall, to walk off our meal. The mall is gigantic and we walked the length of several levels intrigued by the window displays of the designer stores like Dolce & Gabbana, Fendi, Gucci, Prada, Ferragamo, Tiffany, Versace, etc. (We were agog at the prices!)

By 9:30 PM we were back at The Joint. It was fun to say, “I’m with the band,” to gain entrance to the venue.  We watched three bands tear it up: Rad, The Battle Royale, and Raiju. 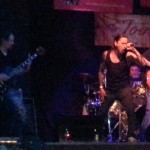 Raiju played the last set and by midnight-thirty we were loading the van with the band’s gear. We received many warm hugs of appreciation from the heavy metal musicians. They left to couch-surf with friends, while we opted to return to our mild-mannered senior citizen status and stay at The Sportsmen’s Lodge in Studio City.

We will resume our roadie status on Friday, when we deliver the band’s gear to the next venue, Loaded in Hollywood.  If you’re in SoCal, come join the fun!