Today is Day 79 of the Papa’s Walk Challenge.

It’s Labor Day! Because of the holiday there was no traffic this morning, so I walked in the middle of the road (a habit Papa enjoyed).

As I walked, a man walking his dog approached from the opposite direction.  He was walking in the middle of the street, too.  As he 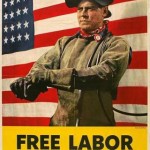 passed by he said, “Don’t you love walking in the middle of the road? It’s such a sense of freedom!” I agreed.

About half a mile later, I overheard a conversation between two neighbors. One man was out for a walk with his children; he was pushing a stroller with a sleeping infant, while his young daughter rode her tricycle. He greeted his neighbor who was watering the lawn and said, “Isn’t it great? No work today!”

The other man agreed and said, “I love Labor Day. It’s my favorite holiday along with the 4th of July. There’s no guilt. You can just relax and put your feet up.”

The Dad with the stroller said, “And turn off your cell phone!”

The neighbor sort of winced apologetically and said, “Uh, well, I’ve got mine with me.”

The Dad said, “C’mon, Art, turn it off. It’s freeing not to have to answer calls and texts.”

Art agreed and said, “I accidently left my phone in the car the other day and it was so great not to constantly have interruptions.”

With that, Art held his phone up in the air for his neighbor to see, and turned it off.

I marveled at that exchange as I walked home. I encountered three different people who were enjoying Labor Day and the respite from work because of the freedom it afforded them.  An interesting and unexpected lesson on this Labor Day.