Today is Day 85 of the Papa’s Walk Challenge.

As I started my walk this morning, a bicycle built for two swooshed by me. A man and woman, decked out 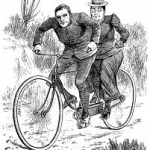 in neon-chartreuse bike gear, were getting their morning workout. The man was seated on the front of the bike and was leaning forward intensely focused on pedaling. The woman was sitting more upright in the rear seat, and was coasting. She didn’t seem to be taking the ride as seriously as her tandem partner. 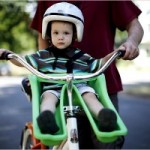 You don’t see a bicycle built for two every day or people riding tandem on a bike.  So, I was really surprised when just a few blocks later I saw a father riding his bike with his infant son in a bicycle carrier seat that fit on the front handlebars of the bike.  They both seemed to be having a great time.  Only the child was outfitted with a helmet and I wished the dad took the same care of his own noggin.

Seeing these tandem riders make me think of a song Papa sang from time to time that he called, Daisy. The song is actually titled Daisy Bell and is popularly known as Bicycle Built for Two. It was written at the end of the 19th century and the lyrics include these lines:

“Daisy, Daisy, give me your answer, do,

I’m half crazy all for the love of you.

It won’t be a stylish marriage,

I can’t afford a carriage,

But you’d look sweet upon the seat

Of a bicycle built for two.”

The song has an interesting history that you can learn more about on Wikipedia. There, you can click on a link to hear the original version of the song sung by Edward Favor that was recorded in 1894 by the Edison Phonograph Company. Or, listen to an updated version of Daisy Bell for children on YouTube.com.