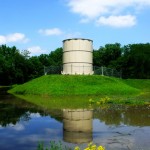 Yesterday afternoon, I met my friend Barb for a walk through a wooded residential section of Menlo Park, California.  We came across a huge water tank on a fenced lot owned by the O’Connor Tract Co-Op Water District, a privately owned water company that operates independently from the municipal water district.

Barb told me that during the California drought in the late ’80’s and early ’90s, water usage was rationed by the municipal district and people stopped watering their lawns, etc. The yards throughout the neighborhood were brown. However, the tract that is serviced by O’Connor stayed green because residents in the O’Connor tract weren’t rationed.

I wondered about the source of the water. Is there a well? I went online to find information but came up empty. If you know anything about the history of the O’Connor Tract Co-Op Water District and/or the source of their water, please post it here.

Today, September 11th, my friend Debbi and I walked around the downtown area of Menlo Park. We walked for 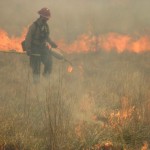 about an hour, but because we hadn’t seen each other in a few weeks, we were focused on catching up through conversation.

On the way home, we passed by the Menlo Park fire station with 340 small American flags planted on the front lawn to commemorate the 340 firefighters who died as a result of the tragic terrorist attacks in New York City on September 11, 2001.

That led us to a conversation about the current Mount Diablo fire. Debbi was appalled by the robbers who broke into the lockers at the fire station to steal the fire fighters’ wedding rings, wallets, and other valuables. Debbi called those criminals “$%&!r@?ds”! I had never heard that word before, but there was never a more appropriate or funny word for the lowlifes who stole from the heroic firefighters. Sometimes, a good swear word says it all.